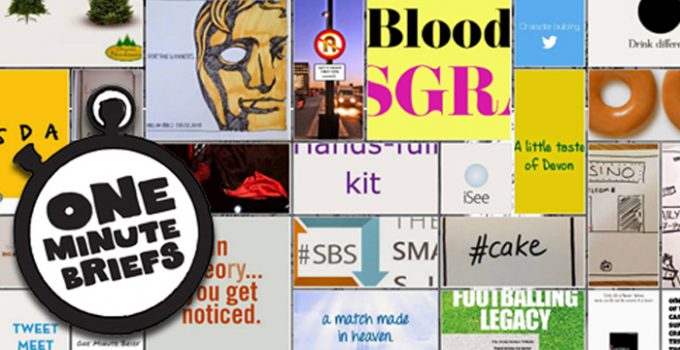 As a copywriter, I don’t think it’s healthy to write about the same thing all day, every day. I need a bit of variation to keep my brain ticking over. To avoid creative tunnel vision.

One Minute Briefs (OMB) provides that variation. It’s a Twitter-based creative contest every weekday, run by Nick Entwistle from The Bank of Creativity, where there’s only one rule: you get one minute to create an advert.

All it takes is a flash of instant brilliance to produce something great. And even if your idea’s a bit dodgy, you only spent a minute on it, so don’t worry about it.

How does it work?

First off, follow @OneMinuteBriefs on Twitter. Have a look back through their tweets to get an idea of the format and to be wowed by the creative genius of the many entrants.

The pinned tweet is normally the day’s brief, then it’s over to you to grab your pen, marker, mouse or phone and come up with a concept in sixty seconds.

You could come up with a witty or intelligent one-liner. Sometimes it pays to be a bit more verbose. Or an image might pop into your head that you just have to hastily draw. But unsurprisingly, the simplest ads are usually the best.

Once you’re done, Tweet a pic of your ad to OMB (who’ll retweet it) and that’s your entry complete. Your ad is seen by nearly 11,000 OMB followers, with the best ones being liked, retweeted by others, and several eventually chosen as winners (see what’s in it for me).

Who can join in?

Loads of designers take part. Many copywriters do too. But in this age of Creatives, where writers are thinking visually and designers are equally as au fait with words, everyone has a fair crack.

Most entrants are in-house or agency creatives, freelancers and students, but there are no restrictions to who can join in; everyone’s encouraged to give it a go.

Sometimes it’s a killer line that steals the show. Other times it’s the imagery. The format doesn’t have to be 2D either. There are lots of cool ambient ideas for places like bus stops, zebra crossings and the inside of lifts.

What’s in it for me?

As an example of number 6, The Gate Films approached OMB last year to get the OMBLES to come up with ideas that could be turned into a film to help save our NHS.

That film ended up becoming the music video for A Bridge Over You by the NHS Choir, which beat Justin Bieber to become 2015’s Christmas No.1.

The script for the video came from that original brief, and OMB ran several sub-campaigns to drive it to the top spot. My selfie was even featured towards the end (new claim to fame).

So it goes to show that anything is possible, even in sixty seconds. Find out more at the One Minute Briefs website.

This post was originally published on the Professional Copywriters’ Network blog.

One thought on “How to hone your copywriting in sixty seconds”